To be eligible to the Win Tickets to the World Junior Championship Contest, an entrant must be a Canadian resident and have reached the age of majority in the province or territory in which she/he resides.

The Win Tickets to the World Junior Championship Contest ends on December 15 at 12:00am (EST).

To participate, contestants can enter the website contest entry page through visiting spraynine.ca, rain-x.ca, and rainxwf.ca. 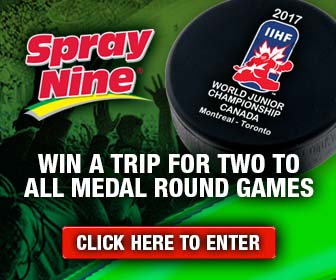 Three (3) Prizes are available to be won.

The Prize consists of a trip for two (2) (winner and guest) to attend four (4) World Junior Championship games. The games include one (1) gold medal, one (1) bronze medal and two (2) semi-final
games. Prize includes: