To enter the Hershey’s Ultimate Game Night Contest and be eligible to win, a person must be a legal resident of Canada who has reached the age of majority in the province/territory in which he/she resides.

How to Receive a Prize Entry and Unique PIN

A total of four million, seven hundred and fifty thousand (4,750,000) instant win plays will be available during the Contest. There are two (2) ways to receive a grand prize entry & an Instant Win Play (while supplies last):

Visit a participating retail store and locate and record one (1) UPC of any Participating Product. The UPC can be found on the Participating Product packaging. Next, on a plain piece of paper, hand-print your full name, province or territory of residence, telephone number, a valid email address. Record the UPC and mail with a self-addressed, postage paid return envelope and with sufficient postage to: 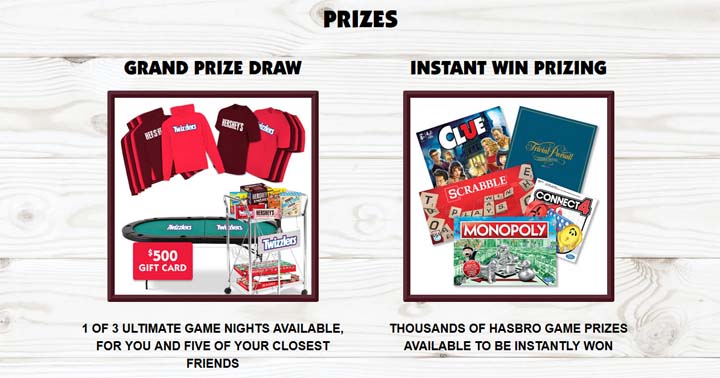 There are three (3) grand prizes and two-thousand five-hundred (2,500) Instant Win Prizes available to be won which are as follows:

There are two-thousand five-hundred (2,500) Instant Win Prizes available to be won at during the Contest. Each Instant Win Prize consists of one (1) of the following Hasbro games as selected by the Sponsor, in its sole discretion: Monopoly, Scrabble English, Scrabble French, Connect 4, Trivial Pursuit Family Edition, Clue Game.

The approximate retail value of each Instant Win Prize varies between $24.00 and $32.00.